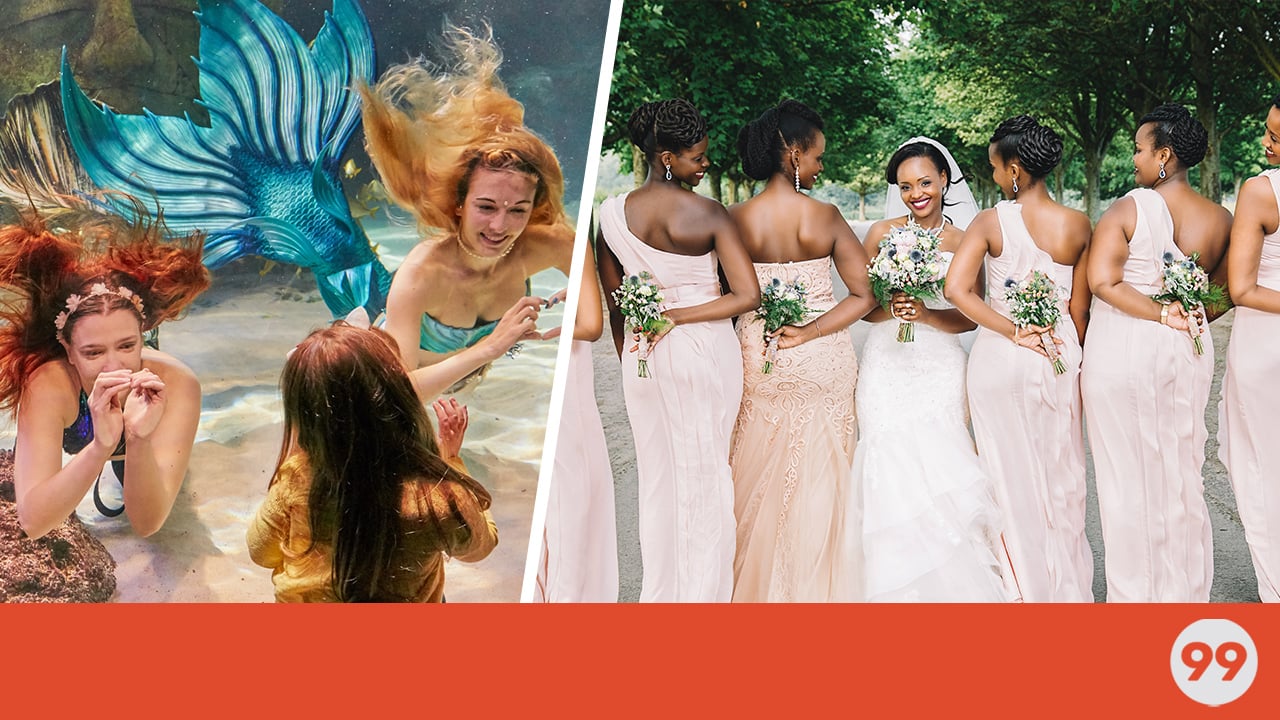 From becoming a professional mermaid to curating Spotify playlists for a living, these are nine of the most unusual careers you can do.

LinkedIn says that over 70% of office workers are unhappy with their day-to-day jobs.

Further to this, Gallop says that “out of the world’s one billion full-time workers, only 15% of people are engaged at work.”

So, it seems that not everyone is destined for the 9-5 life. If you’re one of the 70% of people who think sitting in front of a computer is a nightmare, then why not use this is a sign to shake-up your career?

I’ve searched the internet and found nine of the most unusual careers. And, I have a feeling they might just be right up your street.

Always the bridesmaid but never the bride? Well, why not put that skill to good use by becoming a bridesmaid for hire?

Jen Glantz started her Bridesmaid for Hire business in 2014 and has since serviced thousands of weddings, had three books published and has been featured by over 250+ news outlets.

For a hired bridesmaid, every day looks different. You may be hosting or toasting your fake bestie bride, running the show for the Maid of Honour or maybe just evening out the numbers on the groom’s side.

Getting paid to party doesn’t sound too bad, right? As far as unusual careers go, I think this one might just be the jackpot.

Feng Shui is an ancient Chinese tradition which makes sure ‘Chi’ flows freely through your home.

By becoming a master Feng Shui Consultant, you will guide homeowners and also celebrities alike to create a balance of Chi and promote harmony in their homes.

So, if you have a basic understanding of contrasting colours and know a thing or two about yin and yang, then you’re already halfway there to becoming a Feng Shui Consultant.

Did you know you can make good on your Disney Princess dreams and make a profession out of becoming a mermaid?

Probably the most famous ‘mermaid’ on the planet right now is Mermaid Sirenity.

This niche job is in demand across America and the UK right now. So, if you’ve ever fancied yourself a water baby, this could be one of those unusual careers you didn’t know you needed until now.

A doll doctor is someone who kindly restores customers’ childhood dolls and repairs teddy bears.

If you have a knack for restoration and are a dab hand at sewing, then becoming a doll doctor could be your perfect profession.

Alice’s Bear Shop is one of the world’s only dedicated Teddy and Doll hospitals. They receive stuffed animals who need a bit of TLC from across the globe, and their dedicated doctors work tirelessly to mend broken bears.

See their website to learn more about Alice’s Bear Shop and how you can also become a doll doctor.

Ever wondered how Netflix shows get categorised? What makes them ‘witty’, ‘irreverent’ or ‘swoon-worthy’?

Well, Netflix employs actually a series of people whose job it is to watch shows and movies. Once finished, they’re tasked with tagging each programme with three words that they think describe it best.

However, if you live and breathe all things Netflix, then keep an eye on the streaming service’s job board. You never know when a Netflix show tagger role may become available.

So you’re a little bit boujee? Enjoy the finer things in life? Do you love putting on an elevated picky bits spread for family and friends? If so, then a luxury picnic planner could be your next dream job role.

California’s Picnic n Chill is the perfect example of a booming luxury picnic planner business. They host sophisticated soirees and curate custom tablescapes too. Think everything from balloon installations to fresh floral arrangements too.

Running your own luxury picnic planning business could bring in mega bucks. So, if you’re the hostess with the mostess, maybe you should think about monetizing these select skills?

Have you ever found a playlist on Spotify that just gets you?

Whether it’s chill 90’s R&B on a rainy Tuesday evening or 140bpm running tracks made for Sunday mornings, it’s a professional playlist curator’s job to create soundtracks and put songs in the perfect order.

According to Sound Camps, a professional playlist curator can make anywhere between $24,000 to $40,000 per year. Just for listening to music? I’ll take it now.

If you know people and enjoy spending time championing others, then maybe you’d be perfect for a Director of Happiness role.

The company we work as part of, Social Chain, has its own Director of Happiness. It’s essentially a hybrid HR role that puts staff wellbeing first.

While a Director of Happiness role might be few and far between, there’s no reason you can’t build up your CV with HR experience first. The career of your dreams could be in sight.

Bending, breathing and connecting canines to their carers – being a Dog Yoga instructor sounds like a walk in the park.

Dog Yoga is better known as Doya. It’s a relatively new branch of yoga practice that strengthens bonds and promotes relaxation in our four-legged friends.

Most Doya experts operate on a freelance basis, meaning you can schedule posing in the park whenever you feel like it.

If you want to get started immediately, you can find a Doya class here.