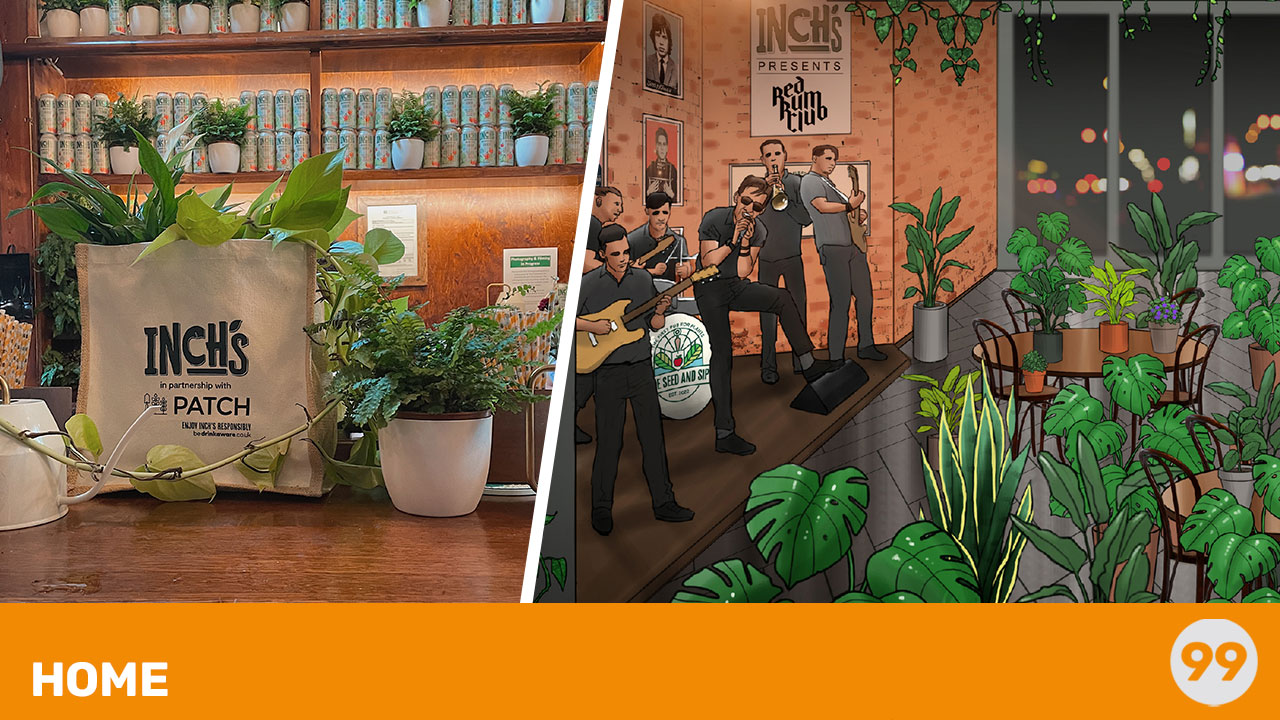 A peony for your thoughts?

You may have missed it, but Inch’s Cider and online plant retailer Patch recently collaborated to create the world’s first pub for plants, the Seed & Sip.

The 99 Problems team headed down to the innovative summer event to celebrate all things horticulture and house plants. The pop-up pub featured everything from a fauna-themed Plant Pub Quiz, to plant speed dating and live music. This was one for the books.

Exclusively for one night only, the Seed & Sip took over one of Manchester’s favourite drinking dens, The Freemount.

Before opening, Patch’s Plant Doctor’s and Edible Bus Stop transformed the Northern Quarter haunt into an oasis of foliage.

Lucky Seed & Sip guests were greeted at the door by a living plant wall. This spectacle was curated by urban space transformers, Edible Bus Stop.

The herbaceous installation was planted especially for the event. However, the plant wall will now permanently take over The Freemount’s exterior. This is in a bid to bring some greenery to the Northern Quarter.

Inside the Seed & Sip, an array of plants, such as ferns and peace lilies, could be seen across every surface.

Patch Founder, Freddie Blackett said, “The pub is a great British institution, and the UK is famous worldwide for its gardens. So, it makes perfect sense for pubs to have lush and inviting spaces for customers to enjoy a drink. Like a pint of cider.”

“We are delighted to be collaborating with a brand [Inch’s Cider] who shares our passions, as we set out to create greener spaces in urban areas together,” he continued.

Guests were encouraged to mingle with the foliage while sipping on free pints of Inch’s Cider or Heineken 0.0. Once they’d got acquainted with the trio, it was time to complete the ‘Speed Planting Questionaire’.

A play on the traditional speed dating format, Patch provided each guest with a Speed Planting Questionnaire to fill out.

The Speed Planting form reads, “It’s simple. Just answer the following questions and hand this card to one of the Patch Plant Doctors. We’ll find your most suited plant partner,”

Questions like, ‘Are you an affectionate person?’ and ‘Do you like a fling or a full-time thing?’ appear on the sheet. Alongside these were more plant-related queries. Questions such as, ‘Would you consider yourself nocturnal?’ and ‘Do you like to sunbathe?’

So, whether you naturally have a green thumb or can’t keep a plant alive to save your life, the Patch Plant Doctors used your answers to partner you with the perfect plant.

Right now, all of the 99 Problems’ plants are still alive, so the Plant Doctors definitely did something right

After helping you find your forever friend, the Seed & Sip then hosted a fun, foliage-themed pub quiz.

Like a traditional pub quiz, teams had to work together to answer questions. Pop culture questions were sliced between Cider-related queries. Think ‘How can you tell the age of a tree?’ Followed with, ‘In the Harry Potter films – what does Gillyweed do to you after you eat it?’

This quiz led to some big-brained guests bagging stellar prizes to use over the summer. These winnings included tickets to Boardmasters Festival and the chance to see Sam Fender at this year’s Tramlines Festival.

The Liverpool sextet’s latest album, How to Steal the World was released last November. Since the record’s release, the band have been touring across the UK and the US.

For their intimate Seed & Sip performance, Red Rum Club played a stripped-back acoustic set. The crowd, fuelled with Inch’s Cider and Heineken 0.0 were in awe. The highlight of the performance was a roaring rendition of ‘Would You Rather Be Lonely’. The latter saw diehard fans up and dancing on pub tables.

Prior to the performance, lead singer Francis Dornan said, “we have performed to many different crowds in a wide variety of venues over the years, but this is by far the most unique audience we will have the pleasure of entertaining.”

“We hope that the plant guests at the Seed & Sip not only enjoy our music but find it uplifting and help them grow,” he continued.

Plants were picked up, festival tickets were won and numerous pints of refreshing Inch’s Cider was consumed. It’s no doubt that the pop-up Seed & Sip pub was a success.

So, do you think you’ll be seeing a plant pub pop up in your town soon?