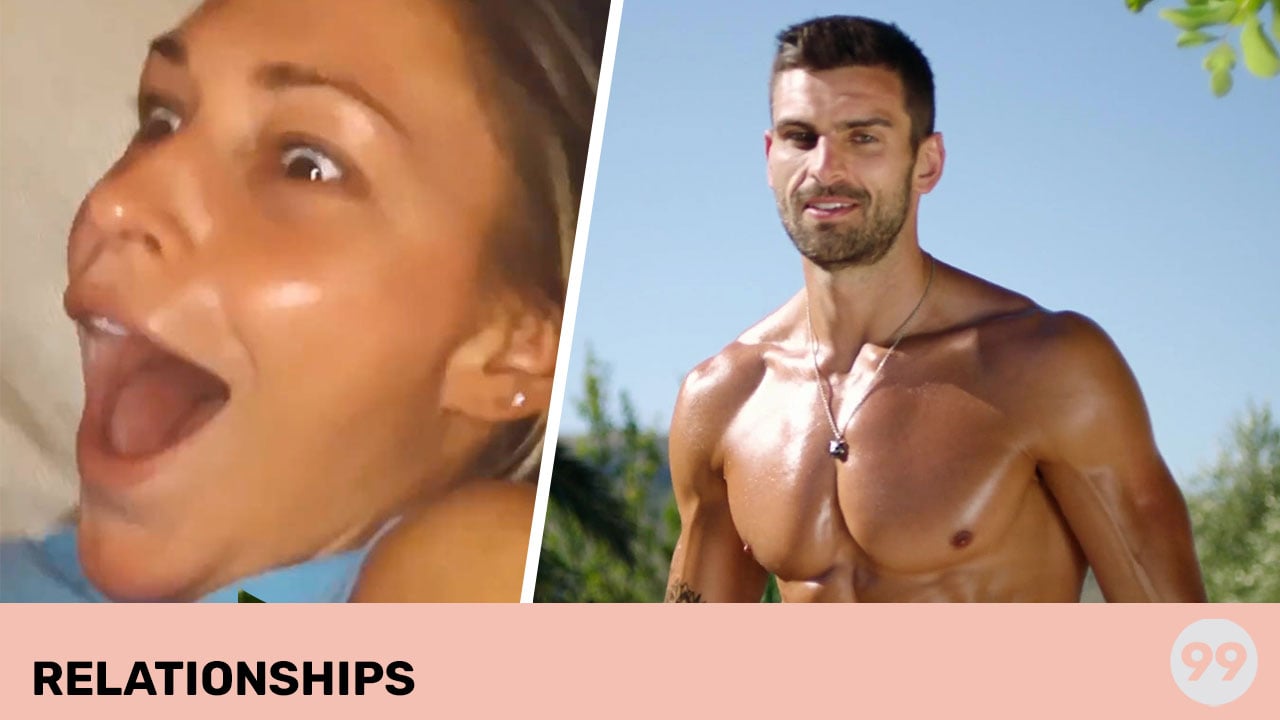 It's a Love Island first.

Zara McDermott provides a hysterical reaction to the news that her ex, Adam Collard, will be returning to the Love Island villa.

In a video posted on Sunday 10 July by McDermott’s current boyfriend Sam Thompson, the ex-Love Island and Made and Chelsea star can be seen gasping in shock as Collard’s return is teased.

“Who’s this guy? Who’s this absolute animal?” Sam Thomspon can be heard saying in the video. After zooming in on Adam’s abs, he then pans the camera to girlfriend, McDermott, and says, “It’s your ex-boyfriend, no way,”

Naturally surprised, the Ex-Islander jumps up to shout, “wait, wait, wait. Put it back-“ before Thompson cuts in and exclaims, “Oh my god, this is the best series ever.”

Over the video, the caption reads ‘Don’t think I’ve ever seen her face light up like that for me.”

Both McDermott and Collard starred in the fourth season of Love Island in 2018. They shared an eight-month romance outside of the villa, with Collard even getting a ‘Z’ initial tattooed on his hand. However, the pair decided to call it quits in February 2019.

After the pair split, Collard then went to date influencer Sarah Godfrey before breaking up in 2020. McDermott paired up with Thompson back in 2019. They regularly post their hilarious Love Island watching reactions on social media. They’re definitely worth the watch.

Following the television teaser, the Love Island official Instagram posted another Collard reveal with the iconic caption “we’d be lying if we said things weren’t about to heat up”.

McDermott followed up her initial shock by commenting ‘You’re joking me’ with multiple laughing phases on the post. Fellow Islander, Laura Anderson replied saying, “paha babe I screamed at the TV this has never happened”.

However, the teaser has also garnered another eyebrow-raising reaction from another of Collard’s ex’s.

Ex-Love Islander, Rosie Williams, took to the Instagram post to also make her feelings toward Collard clear. She simply posted the word ‘Lol’.

This comment was then followed up with a picture of herself and Zara on her Instagram story. The picture is the pair laughing with the caption “I’m just sorry we don’t got popcorn.”

Williams was famously part of the controversial chaos that Collard created in season four of Love Island. She was dumped by the Geordie personal trainer during a recoupling when he opted to be paired with McDermott instead.

Collard is the first-ever Islander to return to the villa and is sure to ruffle a few feathers. I’d be lying if I said I wasn’t excited.

Do you think you’ve got what it takes to tango with Collard and the gang? If so, then ITV is still looking for applicants for this year’s series of Love Island.

In an official form, it reads “ITV2 are looking for vibrant singles from across the UK who want to head to the sun, in search of love.”

You can watch the return of Adam Collard to the ITV Love Island villa live tonight at 9 pm.