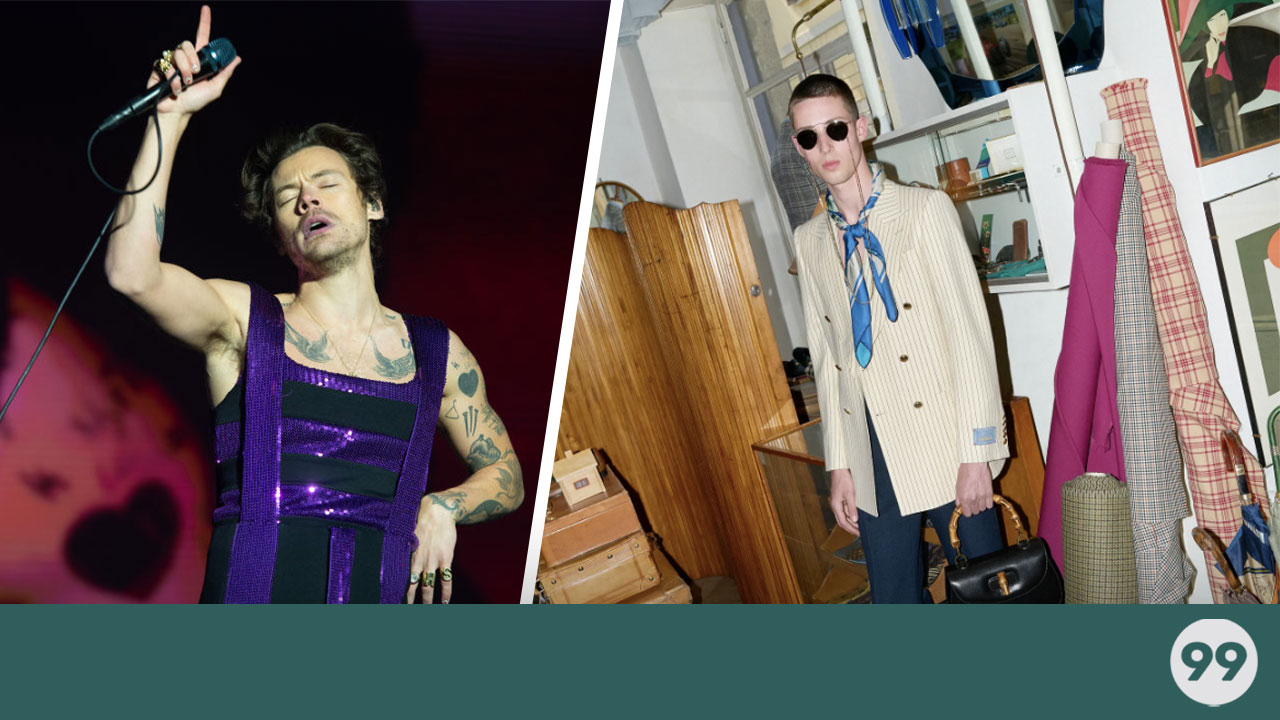 The Harry Styles Gucci collection, dubbed ‘Gucci HA HA HA’, was first showcased as part of Milan Men’s Fashion Week. According to Vogue, it documents “the creative paths and peculiarities of the two artists”,

In an Instagram post, the Italian fashion house says that, “the Gucci HA HA HA collection [is] the synthesis of the friendship between Creative Director Alessandro Michele and the British singer-songwriter and actor, Harry Styles.”

“[its] a collection born from a creative relationship that self-generates from amusement and ends with the tangibility of a product,” continues Gucci.

Interestingly, Gucci HA HA HA, is actually a combination of Alessandro and Harry’s initials. “HA HA HA is the serial crasis of the initials of ‘Harry’ and ‘Alessandro’,” says Gucci. “But, it is also the onomatopoeic sound of the written essence of an emoji, the ‘laughing face’.”

Apparently, according to Stylist, ‘HA HA HA’ is also how Alessandro and Harry sign off their emails to each other. This is your sign to update your email signature right now.

In a statement, Alessandro said, “Harry has an incredible sense of fashion. The idea of working together came to me one day while we were talking on the phone. I proposed creating a ‘dream wardrobe’ with him… We ended up with a mix of aesthetics… From 1970s pop and bohemia to the revision of the image of the gentleman in an overturned memory of men’s tailoring.”

This relationship between Alessandro and Harry began when the former took over as Gucci’s Creative Director in 2015. At the time, Marie Claire reported that Francois-Henri Pinault, chairman and CEO of Gucci’s parent company, Kering, said, “Alessandro Michele has both the qualities and the vision necessary to bring a new contemporary perspective to Gucci and lead the brand into an exciting new creative chapter of its history.”

Alessandro, who has worked at the fashion house since 2002, succeeded former Creative Director Frida Gianni. Following Alessandro’s promotion, the relationship between him and Harry started. Their most iconic collaboration is undoubtedly the Harry Styles Gucci perfume photoshoot.

“The encounter immediately generated a relationship of exchange, of continuous creative contamination, and the drive to explore,” Gucci said of the partnership.

When is the Harry Styles Gucci collaboration release date?


We don’t know exactly know when we’ll be rushing to get a piece from the Gucci HA HA HA collection. This is because the collection is yet to be given an official release date at the time of writing. However, it’s thought to be available by the end of 2022.

What we do know however is that it will consist of 25-pieces and will definitely encompass Harry’s love for flares and bold prints. Keep your eyes peeled for the end of the year. Just take our money, already.

If luxury goods are your thing then maybe you’ll be interested in these Louis Vuitton dumbbells? The next best thing while we wait for the Harry Styles Gucci collection to drop, right?