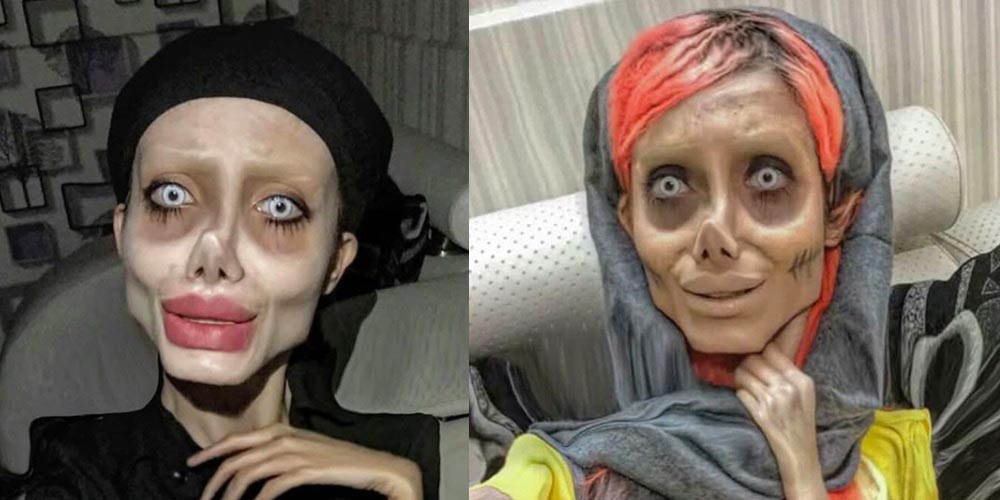 Angelina Jolie ‘Lookalike’ On A Ventilator With Coronavirus In Prison

Hope she gets better soon!

Angelina Jolie lookalike, Shar Tabar, was recently arrested for blasphemy in her home country of Iran. However, it’s now been confirmed that she has sadly caught coronavirus in prison, and is now on a ventilator.

The 22-year-old, whose real name is Fatemeh Khishvand, has become Instagram-famous for heavily editing her pictures to emulate Angelina Jolie’s striking looks. However, she also added a ‘horror twist’ to the pictures, which gained her a lot of attention.

Last year, she was arrested on charges including ‘blasphemy’ and ‘encouraging youths to corruption’. Iran recently released 85,000 prisoners in order to try and slow the spread of coronavirus, reports the Sun.

However, Tabar was not one of them. Human rights lawyer Payam Derafshan said: “We find it unacceptable that this young woman has now caught the coronavirus in these circumstances while her detention order has been extended during all this time in jail.”

Derafshan then added that authorities have reportedly tried to deny that Tabar has caught the coronavirus. He continued: “It makes no sense to deny this. The prison director should acknowledge the infection and admit she has been hospitalized.”

Last year, Tabar did an interview for the first time – without make up or prosthetics.

Tabar went viral in 2017 when she caught the attention of the media with her selfies. The 22-year-old has reportedly had over 50 surgeries and shed over 40kg, but says that she isn’t trying to ‘mimic’ the look of Jolie.

Unfortunately, Tabar has been likened to Tim Burton’s Corpse Bride rather than the Hollywood megastar. If you can see the similarities or not, Tabar is something of a celebrity in look-a-like circles.

Iranian regime-run channel IRTV2 used the 22-year-old to show how ‘the madness to become famous on social media has ruined a real life’.

In the interview, Tabar explained that she didn’t alter her face to look like Angelina. She said: “I do not currently look like my photoshopped pictures. My mother was telling me to stop, but I didn’t listen. Sometimes the words of a stranger or a friend can be more important than those of a parent.”

She added: “Vulgarity on social media gets a lot of clicks.”